$460.00 $414.00
(You save $46.00)
Where’s the Price?
* Since our price is lower than the manufacturer’s Minimum Advertised Price, you must add the item to your cart to see our lower price. Product can easily be removed from your cart if wanted.
Write a Review

A new family member of PLANET 60W Ultra PoE Solution, the GSW-1222VUP is an 8-port 10/100/1000T Ultra PoE + 2-port 10/100/1000T + 2-port 1000X SFP Gigabit Ethernet Switch with a total of 380 watts of PoE budget. One special feature that this unit has is the LCD display for PoE work status monitoring. Each PoE port can deliver up to 60-watt power over Cat.5e/6 Ethernet UTP cables which allow data and power to transmit simultaneously to a remote 60W or standard 802.3at compatible powered device (PD) for different kinds of PoE applications, respectively.

The GSW-1222VUP is an ideal Plug and Watch Power over Ethernet solution which provides quick installation, real-time PoE monitoring and immediate troubleshooting through its unique LCD display to improve work efficiency and quality without any PC or software required.

60 Watts of Power over 4-pair UTP System
The GSW-1222VUP Ultra PoE solution adopts the IEEE 802.3at PoE standard. Instead of delivering power over 2-pair twisted UTP – be it end-span (Pins 1, 2, 3 and 6) or mid-span (Pins 4, 5, 7 and 8), it provides the capability to source up to 60 watts of power by using all the four pairs of standard Cat.5e/6 Ethernet cabling. In the new 4-pair system, the GSW-1222VUP is able to deliver per port 60watts of power to each remote PoE compliant powered device.

The amount of power capability that the GSW-1222VUP possesses doubles that of the conventional 802.3at PoE, thus making an ideal solution to meeting the growing demand for higher power consuming network PDs, such as:

Flexible and Extendable Two Gigabit Uplink Solution
The GSW-1222VUP provides two extra Gigabit TP ports and two extra Gigabit SFP interfaces. The two Gigabit TP ports support 10/100/1000BASE-T RJ45 copper for surveillance network devices such as NVR, video streaming server and NAS to facilitate surveillance management. Or through two Gigabit speed fiber SFP slots, the 1000BASE-SX/LX SFP (Small Form-factor Pluggable) fiber transceiver is inserted to be uplinked to a backbone switch and monitoring center over a long distance. The distance can be extended from 550m to 2km (multi-mode fiber), or even going up to 10/20/30/40/50/60/70/120km (single-mode fiber or WDM fiber). They are well suited for applications within the enterprise data centers and distributions.

Smart Fan Design for Silent Operation
The GSW-1222VUP features a low noise design and an effective ventilation system. It supports the smart fan technology that automatically activates 3 fans once the PoE budget reaches 126 watts and maintains the temperature of the GSW-1222VUP for optimal power output capability. The GSW-1222VUP is able to operate reliably, stably and quietly in any environment without affecting its performance.

Quick and Easy PoE Network Deployment
As data transfer and high power PoE are transmitted over a cable, the GSW-1222VUP is able to reduce the need of extended cables and electrical outlets on the wall, ceiling or any unreachable place. It helps to lower the installation costs and simplify the installation effort. All RJ45 copper interfaces of the GSW-1222VUP support 10/100/1000Mbps auto-negotiation for optimal speed detection through RJ45 Category 6 or 5e cable. It also supports standard auto-MDI/MDI-X that can detect the type of connection to any Ethernet device without requiring special straight-through or crossover cables. 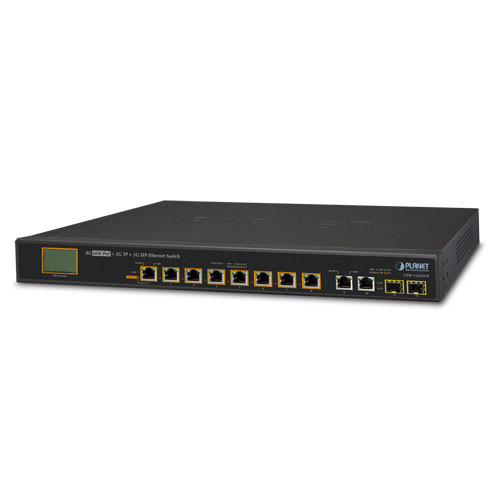